The rise of DAOs has introduced new and interesting problems. Amongst them is the need to deploy capital efficiently while abiding by the constraints inherent to the blockchain. Nouns DAO ran into this issue early on. After having accrued a sizable treasury only months after its inception, we needed a way to onboard and fund builders to build within our nascent ecosystem.

Initially, the only path forward was proposing to the DAO. While this got the job done, it came with a lot of friction. It would take weeks to go from idea to funding. A new approach was needed in order to scale deployment of the treasury.

Prop House introduced a new mechanism to deploy capital: an auction where the lot is ETH and the bids are proposals. At the end of each auction, members of the community vote on which proposal gets funded.

Conceptualizing it as an auction is fundamental because it introduces a prominent feature: the recipient of the lot is unknown at the time of deployment. This feature allows the funding auctions to be modular, automated and self-sufficient.

Modular: Auctions can be used as units of deployable capital with varying properties. For example, DAOs can scale up or down as they see fit, have open-ended or mandated auctions, auction of auctions or even have the auction be deployed by one DAO for another NFT community to consume.

Automated: DAOs can deploy capital on an on-going basis with minimal overhead. Deploying concurrent auctions at differing levels of funding at all times is a matter of setting up the auction. So long as there is interest in building for the community (and thus bids), the capital can be deployed.

With proposal 23, Nouns DAO funded the build out of the first implementation of Prop House. Since then, Prop House has deployed 29 ETH to 10 builders across 3 auctions where 112 proposals were submitted. A double digit percentage of these proposals were highly desirable which hints at the mechanism being an appropriate approach to onboard and fund builders.

Nouns being a slow-drip protocol where one Noun is minted, every day, forever, it is clear that in order to scale the Nouns Prop House to 1000s of proposals, voting would need to be extended beyond Noun owners to be able to handle the volume.

With proposal 62, Nouns DAO funded the next iteration of Prop House: independent houses. A house is a place where a particular NFT community holds funding auctions. They alone vote on which proposals get funded. Funding can be supplied by Nouns DAO entirely or partly as a collaboration. 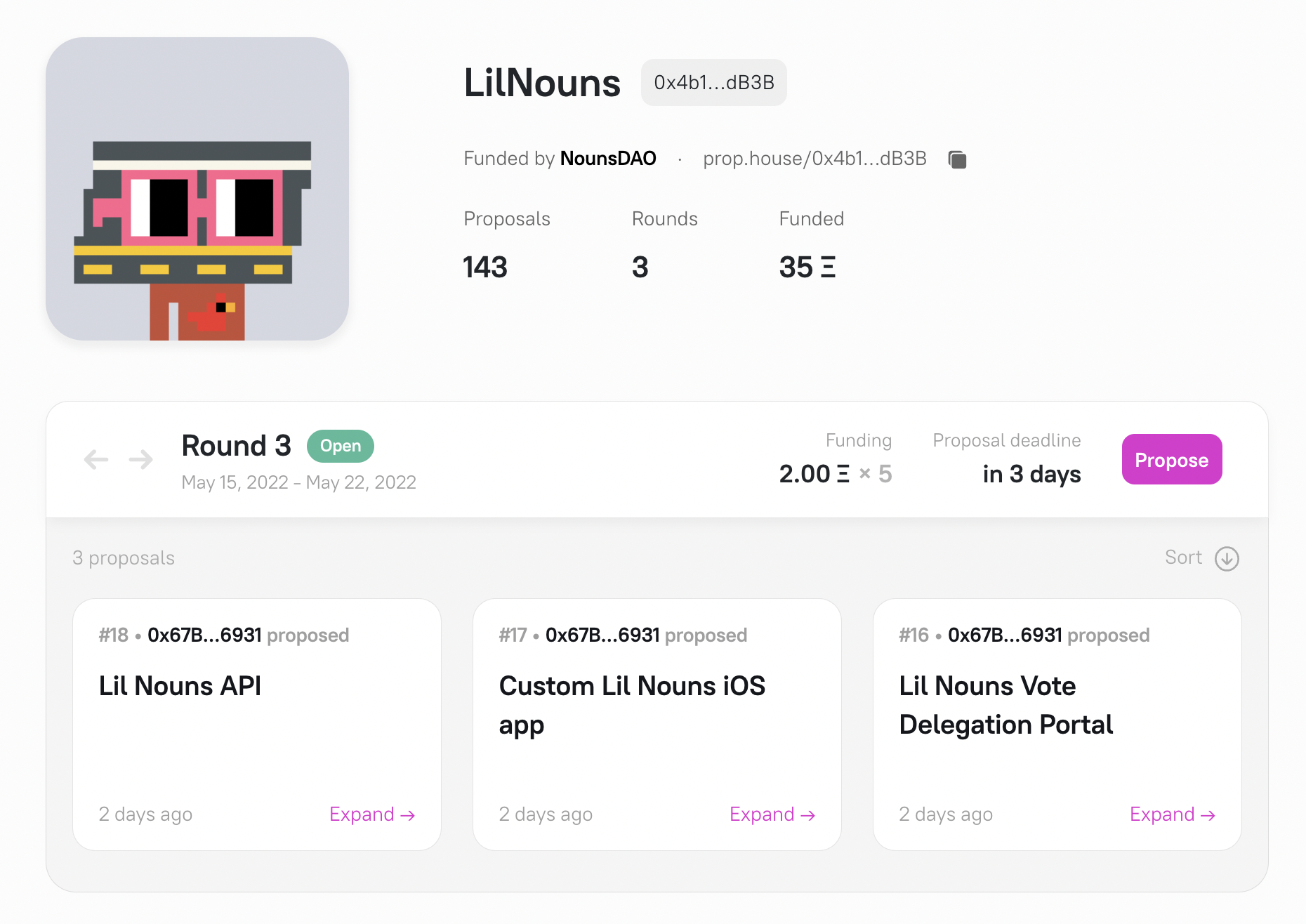 Through independent houses, Nouns DAO is now able to fund external nounish communities houses (and their corresponding funding rounds). In this manner, we can scale our efforts atop of the Nouns Prop House and onwards to a thriving ecosystem of independent prop houses.

Beyond funding, this is a new way for communities to gather around and create. If the ERC-721 standard is thought of as the social graph, Prop House may be looked at as the permissionless power source that communities gather around. Akin to reddit, I believe we will see NFT communities for every niche imaginable. But unlike reddit, these communities will live on the blockchain. Imagine a world where all subreddits could be funded — how much faster would we be able to empower the people that can change the world? Prop House aims to capture the energy of these communities to unleash their creative potential.

Prop House v2 is live today. Check it out at prop.house